If you are like me, you probably thought the KBOX 2000 Series was simply the latest version of the previous KBOX I reviewed with some new functionality. However, it is actually a new product from KACE- a second appliance solution. This time, instead of attacking the problem of software deployment, inventory and other desktop maintenance tasks, the KBOX 2000 Series takes on the task of provisioning. It supports both unattended installations and drive imaging with a remarkably simple interface.

The server is 1U in height and is completely managed from a web interface (the unit itself runs FreeBSD). The model I have here is the 2100, which comes with 480 GB of drive space (four hot-swappable 160 GB drives in a RAID5 configuration), 2 GB RAM and dual Intel 3.0GHz Xeon processors. A heftier version is also available in the form of the KBOX 2200, which offers 1.5 TB of drive space, 4 GB RAM and two 3.4GHz Xeon processors. Which you need depends upon the number of concurrent connections you will be supporting, the 2100 and 2200 are designed to manage a capacity of 10-20 and 40-60 concurrent connections respectively. This will not be the quietest chunk of technology in your server room due to the fan noise generated in order to cool those two processors in one U of rack space. Physical installation of the unit was a breeze as it was not very heavy and came with mounting brackets.

Configuration of the KBOX 2000 series requires you create a DNS entry and update DHCP to point any PXE clients its way. You’ll need to provide it an IP address on your network and from there, every task is managed through its simple web interface. In fact, once set up, the server does not require a monitor or keyboard be attached at all. Setup was not difficult, but it was not something you’d want a junior administrator to attempt without some help. That help is provided by the company (KACE) personally; they will walk you through the setup and provide some simple instruction to help you understand how to operate it.

There is no client to deploy because KBOX relies on PXE to do its bidding. If you like, you may set a password for the PXE boot menu to protect users from themselves. However, you can configure computers to simply boot to the local hard drive without presenting a menu at all; and you can then make the effort to change that setting only on select systems when you have a task you wish to perform. Once configured to boot to PXE, the KBOX 2000 series will let you dictate what the PXE boot does (perform an unattended install, bring up the recovery console, upload or download an image). This is all configurable from the console and it is a very effective way of controlling how system startup operates on your managed clients.

So just what does it do?

While this is a very capable system, it was not without its problems. Inline with describing its excellent features, I'll also discuss those and places I see room for improvement as we go…

When I hear the term application "slipstreaming" I think of a process whereby the files and registry entries are merged into that of the target-- in this case Windows. While I have not seen a product capable of that (at least not prior to Vista), the KBOX 2000 Series is not far off: the setups are actually merged into your target Windows distribution, where they are then called upon following installation. As you can see by the image here, this is a fairly integrated process. 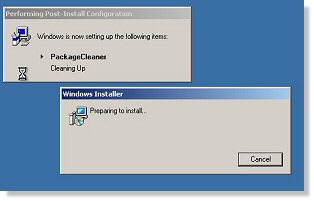 You can instruct your unattended installation to automatically log on a specified number of times, which means this entire process can be truly unattended. The KBOX is simply taking advantage of automation features provided by Windows, but it does so in a very intuitive way which (particularly for those not savvy with the unattended process) is invaluable to taking full advantage of these capabilities.

To get applications installed as part of your unattended deployment of Windows, you need only specify a file, it's command line installation parameters and with which unattended installations you want it included. When you add a new application install from the web console, the file specified is uploaded, placed in the necessary folder structure and the command line is added to the unattended installation of Windows. At this time you must specify a file to be uploaded, but I’m told this will be updated in the future for those cases where you wish to run an existing command and have no associated file you want to copy.

In a very clever move, the KBOX 2000 Series includes support for zip files so that you can have one file to upload for an installation that may require many files and folders. You still need only identify the command line for the installation as the KBOX will handle decompression. When you use a zip file in this way, the installation process will decompress and change to the directory automatically for execution of your specified command line.


Curious about scalability? It is reported that one KBOX 2000 can handle anywhere from 100 to several thousand clients. With so much drive space and power provided, the real limitation becomes the concurrent number of machines you wish to handle at the same time (there is capacity for up to 60 depending upon the model chosen). Relying on PXE boot, the common architecture would be to have an appliance at each site and manage clients locally. With its web interface it is very easy to manage remote systems, you just would not want them coming over the WAN for any of these network intensive tasks. 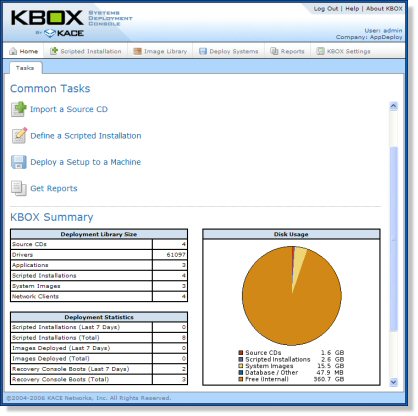 So what about pricing? For what you get here, I think you’ll find it quite reasonable: the base package is $12,900 supporting 100 nodes. Naturally there are quantity discounts as well: to give you an idea 1000 nodes would be in the neighborhood of $30,000. Support and maintenance is available on a standard annual basis and includes any updates, drivers or recovery console updates that may be released.

In closing, I feel that the KBOX 2000 Series provides a cost-effective way for smaller organizations to enjoy some automation features traditionally targeted at much larger enterprise environments. The recovery console is an innovative feature that may provide an invaluable tool for when things go wrong with a workstation. Both unattended installation and imaging support provides you with the choice to go with the best technology for your organization (while still having the benefit of the other when you want it). The resulting unattended file structure and command lines generated by the KBOX from a simple web page interface is not a trivial task to generate manually, even for the seasoned IT professional. This combination of features in a powerful appliance solution at such a competitive price makes it a product worth a serious look for any small or mid-sized organization.

Check out the KACE website for more details, screen shots or even a live demo.