This is a two part article, the first part is based on Timokirch's work where he created an AutoIT script that could be used in a K2000 deployment to install K1000 scripts to your machine.
http://www.itninja.com/blog/view/k2000-install-default-software-from-k1000-during-deployment-1
I took that script and updated it so that it works smoother and now allows you to run not just one, but multiple K1000 scripts in a single call.
This means you can now do what Timo was showing, but at a larger scale.
The reason I made this update is I also created a GUI that you can just toss on a thumb drive or network share, it lets you pick any of your K1000 scripts and immediately run them on a PC with no need to log into the K1000 to add a computer to a label or to a script.  Its like a forced install on the spot with none of the hassle, as a bonus it lets you know when the jobs are done so you are not left waiting and wondering when silent installs are done.
So the net result is a faster, easier, safer custom deployment when you want to use the K1000 as a means to install software and scripts onto a computer.  I have seen tech's log into the K1000 to add a single computer to a Run Now script and forget to take a label out and push it to 100.  Now you can install with no interaction or effect on the script itself as far as what computers or labels are assigned to it.
This also means techs that should not have admin access to the K1000 can use the scripts for PC installs.
Using k2_script_call.exe in a K2000 post installation task
First thing is to have one or more K1000 scripts you wish to use.
Log into your K1000 and go to your scripts and look at the ID for the script.
You can mouse over one of the links and look at your browsers URL information at the bottom:

Once you have your list of ID's now it is time to create a K2000 post install task to push these scripts on a deployment. 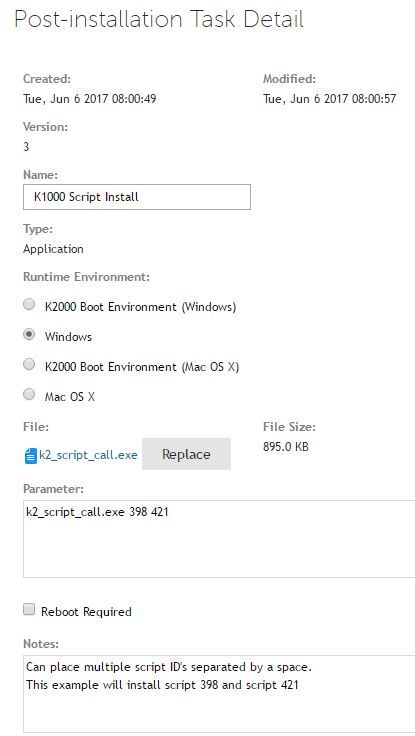 That is all there is too it.
You can now install multiple K1000 scripts to a K2000 deployment
Note: K1000 Agent must be installed on the computer so that needs to be one of your install tasks or in your image.
K1000 Run-Now Scripting GUI
This is the all new functionality that I wrote using the same concept as the K2000 post-install task; I wanted a way to run scripts on computers that are already deployed and I need a way for users to do it as it would not be reasonable to expect them to open a command prompt and manually type script ID #'s to run them on a computer (however that would work should you do it)
So in comes a custom GUI that was written so you can add your own K1000 script information via an INI file and run it on the spot for any computer.
There are 3 files in place in total.
k2_script_call.exe - Does the actual call to the K1000 and the installing as seen above.
Manual K1000 Scripts.exe - The GUI we wrote to wrap around k2_script_call.exe
K1000Scripts.ini - where we store all of our own information for what scripts to use based on our environment.
First a look at the INI file.
It is simply the name of the script that you want to show up on the GUI, and the script# associated with it in the K1000

Once you launch the GUI all of those options will be present as drop down combo boxes.
Choose any number of scripts (up to 10 I put in the GUI for a balance of lots of options but not too many, but you can have as many selections in the drop down as you like) 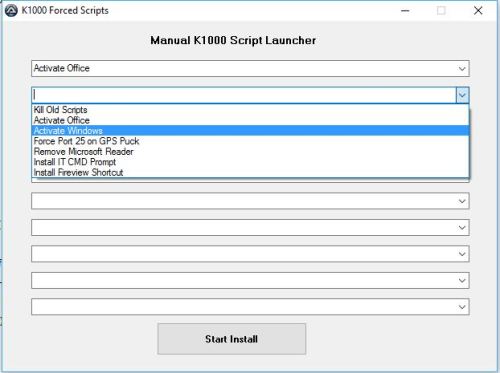 Press Start Install - That's it! walk away and let computer magic work for you.
As an extra I also put k2_script_call_progress.exe in the download, works exactly the same as the other version but has an on screen progress bar to give you an idea of what script is installing and how far along you are in the installation.

Ninja since: 8 years ago