After scheduled downtime, a reboot, or anytime the web service of the appliance is unavailable for an extended period, the web interface may become inaccessible, and the konsole will display the error message "Limiting Closed Port RST Response from X to 200 Packets/Sec." 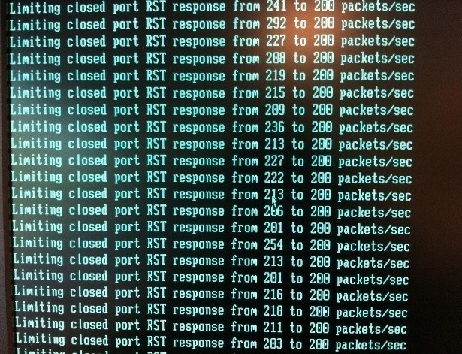 This error message indicates that the K1000 Appliance is getting more than 200 packets per second on closed ports, and will occur when a large number of clients attempt to connect to the appliance at the same time.  The threshold of 200 is a limit built into BSD.

As the web service on the appliance is brought back up during the boot process, and agents begin to connect, the konsole messages should subside, and the web interface will again become accessible.

Web interface inaccessibility and delays to the boot up process, caused by the konsole messages, may be prevented.  Removing the appliance from the network, or simply removing the network cable until after boot up has completed, should prevent further issues.

What does 'Limiting Closed Port RST Response from X to 200 Packets/Sec' message mean?

Ninja since: 8 years ago