Authors Note:   There are some similar articles from @SMal.tmcc that also go over this function:


In order to do this, you must have imported tasks from the K2000 Streaming WIM Toolkit from here:

The KACE Streaming WIM Toolkit provides components that allow WIM files to be streamed to the endpoints instead of copying and extracting from the local drive.  This can be useful for environments where disk space is low.  Typical WIM deployments require that the WIM file be copied to the local drive first, then the WIM file is extracted to the partition locally.  To do this however, the endpoint will require over 50% free space available.  Systems with small disk drives and large images will need to utilize this method.  The streaming toolkit will bypass that requirement and extract the WIM file directly to the system.  This can make deployments a bit faster, but the downside is that the streaming WIM deployments cannot utilize multicast.

While the KACE Streaming WIM Toolkit (KSWIM for short) has a few uses and in this case we are going to use the system image deployment template.  With a standard WIM deployment, the image is injected during the “Deploy System Image” component of the installation plan.  When streaming a WIM you need to use the streaming template that “fakes out” the system into thinking it is applying an image.  The image will actually get unpacked and installed to the hard drive as a post-installation task (mid level – K2000 Boot environment).  Using this method we will alter the post installation task we use to deploy a WIM from a location other than the default image location on the KACE appliance.

Follow the included instructions to import the tasks into your K2000.  Once imported you will notice templates for streaming images in your post-installation tasks section of the K2000 library.

Once you have imported the tasks into your K2000, go into the System Images and edit the single partition template and DUPLICATE the task at the bottom of the screen.  DO NOT edit the template so you can use it later if needed.

Once duplicated, setup the new System Image make sure it has the correct partitioning tasks.  We will add the image deployment in a task later on.  If using the driver feed, ensure that this option is checked as it is off by default.  Remove the existing “Apply WIM Stream C Partition” task from the mid-level tasks. 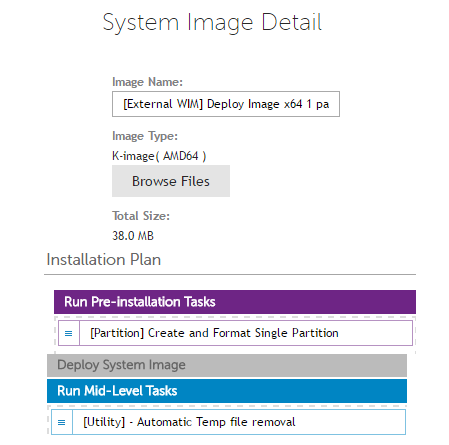 Next we need to either map a network drive as a post-install (Mid-Level) task if you are storing WIM files external to the K2000.  Create a post install BAT script task that looks like this (modify with your server IP and share, username and password: 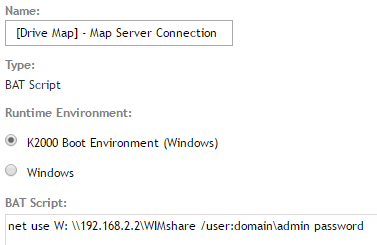 This should be the first mid-level task run in your system image sequence if you are going to use an external source for the WIM file.  Copy your WIM file(s) to this share on your server.

Alternatively, we can store WIMs on the K2000 in the PETEMP directory.  Open \\<yourK2>\PETEMP and create an Images directory.  Copy your WIM file(s) into this directory as shown here:

Inserting into an Image Deployment

Once we have the WIM file(s) stored on our external source (or PETEMP folder), we need to make a task to apply the WIM file to the hard drive.  Create a mid-level BAT script task again and use the following command:

In this example we are calling the Win10x64.wim file which is stored in the Images directory on PETEMP.  PETEMP is always mounted as the T: drive in KBE environments.

If you are using an external source, then specify the drive you mapped in the mapping task you created.  Using the previous example drive mapping, it might look like this:

Once you have the Post Install tasks created, we need to insert them back into our System Image deployment.  A complete install might look like this: 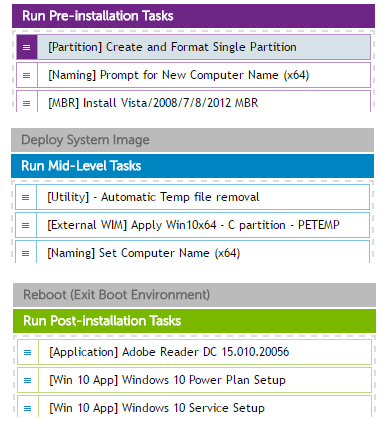 This document has outlined how to utilize WIM files that you may already be using in conjunction with the K2000 deployment appliance without having to deploy the WIM and then recapture the image in the K2000 appliance.

This document can also be accessed in PDF form here: