I am trying to come up with a way to inventory if a machine has dfsutil.exe.  However every attempt to do this with custom inventory rules has failed.  I have tried the following:

FileExists(C:\Windows\System32\dfsutil.exe) - Does not apply to any machines.

ShellCommandTextReturn(dfsutil) - Only 2 machines out of over 500 had this rule check in for some mysteriously odd reason.

Oddly, when I changed the path to the FileExists rule to C:\Windows\System32\fc.exe as a test, all machines detect the rule properly.  I did this after making the other rules, so I know that new rules do work if it does not have to do with dfsutil.  I do not know why this happens.

I haven't tested it. But I see a "dfsutil.exe" in c:\windows\system32 only, not in the c:\windows\syswow64.  The "fc.exe" file exists in both system32 and syswow64 directories, hence the different results you are getting.

The 2 machines you see with feedback (or the one in the example of SMal.tmcc) are (more than) probably 32bit OSes.

I think it's quite time that Dell starts distributing a 64bit AMPAgent. We no longer have 32bit systems at our company, and we have to think about these stupid workarounds all the time when configuring scripts and rules and so on.

Example : run powershell/vbs scripts that need to write in the 64bit registry. Because they are called by the 32bit agent, they will run in a 32bit context, unless you explicitly use the cscript/wscript/powershell.exe from the sysnative directory. If the agent were 64bit, these files and inventory rules would run in the right context all the time. 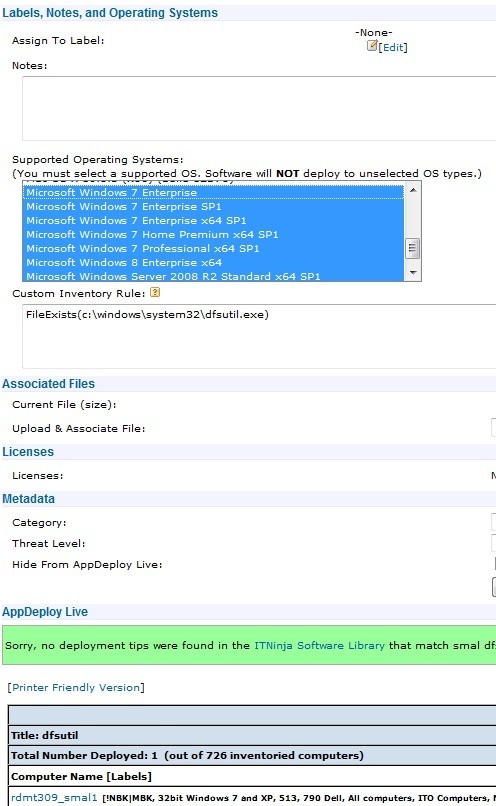 Are you forcing an update after setting up the rule with FileExists(C:\Windows\System32\dfsutil.exe)? Machines will only run the rule at the time of updating their inventory so if you aren't forcing an update or waiting for a long enough time that machines check in then you won't see the field populate in the inventory.