Until Java 7 upd17, I used to deploy Java with
msiexec /i "jre1.7.0_17.msi" /qn AUTOUPDATECHECK=0 IEXPLORER=1 JAVAUPDATE=0 JU=0 MOZILLA=1
after uploading the MSI plus CAB in a zip file to the Kbox.

But on Java 7 update 21, that doesn't work anymore.

I also tried:
- jxpiinstall.exe /s /l c:\javalog.txt
- A .BAT file, with the msiexec command inside plus a lot of "taskkill" commands.

Nothing worked.
ONe thing caught my attention: instead of the old Data1.cab we used to find out along with the MSI installer, we now have DLLs. I wonder if a KACE deployment can recognize non-registered DLLs during the install.

Anyway, I'm totally stumped. Any tips would be greatly appreciated.
Has anyone managed to deploy Java 7 update 21 through KACE?

I have done it do 300+ users but i do it in a script. I installed Java on my computer and went to C:\Users\username\AppData\Local\Sun\Java  and took everything in there and stuck it on my software server i have for simple installs like this.

Here is my script below:

the registry hack turns off autoupdates. This may not be everyone's cup of tea with deployment but I pretty much use all scripts for installs. I like being able to control more within a VBS

I just finished packaging 7u21 as well, it installed really well. I used an install.bat with the "Windows Offline" downloaded from here: https://www.java.com/en/download/manual.jspinstall.bat was just: start /wait jre-7u21-windows-i586.exe /s /v"/norestart AUTOUPDATECHECK=0 JAVAUPDATE=0 JU=0" MOZILLA=1You might give that one a try as well. Worked really well for me. I even added it to our K2 for use in the base image.

I simply deploy the JRE .exe with the /s switch and have no issues...

Here's a shot of the setup for a silent install: 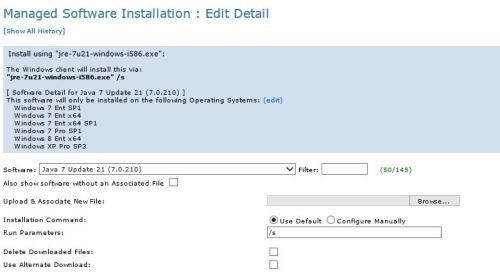 Ok, I've finally found my stupid mistake and installed Java 7u21 32-bits in a 64-bit Windows.

It is still possible to install it using the method I explained in the first paragraph of my OP. Problem is, I tried that without using the offline installer.

So, managed installation goes as follows:

And that's it. Java 7.21 32-bits is installed in a 64-bit machine.
Thank you all for your input, and sorry for such a dumb mistake.