Here is what I'd like to script, but haven't seen much similar yet in my googling:

-If user is logged in - check to see if winword.exe or excel.exe are running

-If neither process is running - reboot

I see that I can get Kace to check for running processes, and have done this for scripts successfully.  I don't see how I can get user prompts for input within a single Kace script (the OK or Snooze buttons), it seems like only static message boxes are an option.

So as a work around I was thinking seperate scripts:

-Script one: Checks for the running processes and if they are running leaves a flag file (C:\promptforreboot.txt or something)

-Script two: Anything with that flag file gets the "Alert User Before Run" dialog, with OK causing a reboot and Snooze snoozing for 1 hour

-Script three: Anything without the processes running, and without a flag file gets rebooted immediately

That's all pretty awkward to make work, and I feel like there is room for error.  Any tips?

Have you looked at AutoIt? I use this to create exe's that perform certain tasks.

Compile the script below into an exe. Then upload the exe as a dependency.

Here is what I decided to do: 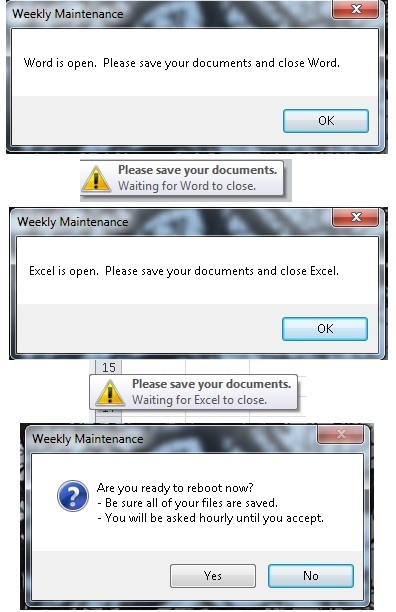