the Machine actions do little for me since most of my hosts are in other locations and not on the same LAN as the kbox, I have a script that lets me select a PC and remote into it with Bomgar.  thats great, but I would like to know if there is a way to run the Bomgar script (the script not the push client) and have that PC selected.

right now, when I find the PC that I want to loginto , I need to go to Scripting -> run now -> select the script, then select the PC, and then hit run.

I would like to be able from the inventory view, just hit the computer and have the option to run that script with the PC selected.?

All a machine action is really doing is the equivalent of lauching a command from the command line.  The K1000 has the ability to use a variable in the command to pass IP or hostname information along.

So, say, you have run the script on the machine already, it will have a folder here in Win7: C:\ProgramData\Dell\KACE\kbots_cache\packages\kbots

You could use a command line prompt in the machine action to launch it by something like the following command:

Substitute the number of the script for the x.  You can find this by hovering your mouse over the script in the listing. My example is hovering over the enable debug script, which is number 32, shown in the lower left hand side of the screenshot. 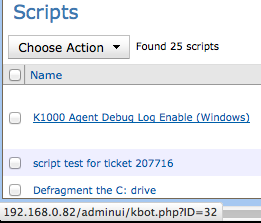 If it wasn't already on the machine, you could either run the script on all machines or use the file synchroniztion tool.

Here's an example of something similar: http://www.itninja.com/blog/view/machine-action-bluescreenview

I use the Machine Action below to initiate a Bomgar session. We have the free hosted instance. Just started setting this up last week. You have to have your Bomgar Console open for it to work.