I have been trawling the Forum for the reccomended approach to deploy Windows 8.1 to DELL 90xx Desktops and DELL Lattitude E54xx Laptops.

I normally create my Master Images in my VSphere environment and progress from there but I am unable to install Windows 8.1

The Preinstallation task sequence is where there seems to be differing opinions with some saying I can do the following:


Others saying Use Create UEFI Partitions ?

I have also seen where some create a USB Key for the BOOT environment..

Has anybody had sucess deploying Windows 8.1 using KACE 2000 and what steps did they take ?

I uploaded the needed drivers to the k2000 (\\ikbox\drivers\kbe_windows_x86) and used the MM and the 8.1 adk to create a boot env.  I uploaded the win 8.1 media from my install DVD.  I then downloaded the bootable USB flash drive image for the 8.1 boot env and created a UEFI boot stick.  Using a 3.0 USB hub I uefi booted the dell tablet to flash drive connected to the hub and it loaded the drivers to activate the dongle plugged into the hub.  I then chose the 8.1 ent scripted install from the menu. 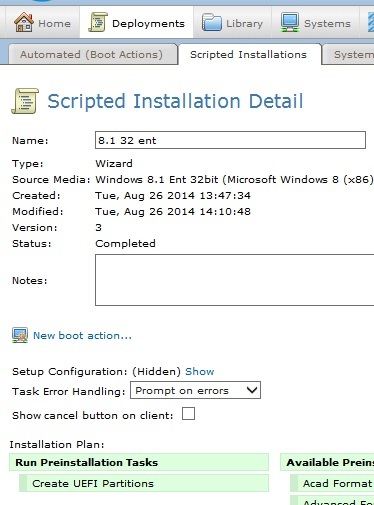 Please log in to answer
0
If you're capturing a UEFI image, then you need to create UEFI partitions and also capture and deploy the boot partition.
What part is failing?
Answered 08/27/2014 by:

This content is currently hidden from public view.
Reason: Removed by member request For more information, visit our FAQ's.
0
normally no big issue.
Where does it fail?
Which error message is provided?
(screenshot if unsure)
Answered 08/27/2014 by:

0
With my experience, when you capture an image, you need to capture both the SYSTEM and C: partitions. Then have a create TWO partitions pre-install task, followed by a format C: and D: (these will change post deployment) as NTFS.
Answered 08/27/2014 by: